The History of Tilikum

Tilikum is the result of one family’s faithfulness to God.

Russell Baker was born on March 21, 1908, to Ida and Harry Baker, who owned a dairy farm in the Chehalem Valley. Eventually Russell bought this farm, and the acquisition of it caused him to seek out his personal values and God’s purpose for his farming life. On October 12, 1962, the Columbus Day storm blew through western Oregon with hurricane-force winds. The Baker farm was hit especially hard. Irene Baker, Russell’s wife watched from the house as the storm reduced the dairy barn and silo to rubble. The Baker’s estimated losses were $40,000-$50,000 with no insurance to cover wind damage. Russell thought he was financially finished. He wrote, “In meditating on what to do. I felt led to make a vow or covenant with the Lord…if He would bring me out of this mess, I would not only give a large part, but all.”

In the next few years, Russell did recover from the storm damage, and according to his promise, he began to look for ways to use his farm for God’s work. In 1968, Russell sold some of his property and purchased a tractor to use in developing the lake. In 1970, the Bakers donated the newly formed 15-acre lake, their new home, a barn, and the remaining 77 acres of the original Baker farm to the Northwest Yearly Meeting of Friends. In 1975, Tilikum came under the ministry of George Fox University. As of Jan. 1, 2012, ownership of Tilikum transferred back to the Northwest Yearly Meeting of Friends.

Interested in learning more about Tilikum’s history? View Living a Legacy, Tilikum’s 25th anniversary booklet covering the camp from 1971 – 1996. It’s a large (24 Mb) file, but well worth the view.  [View the booklet]

The Camp Tilikum legacy – The Russel and Irene Baker Legacy [View the video]
Used with permission of OPB.

The Essence of Tilikum A Retreat Center video from 1984  [Watch the video]
In 1984 Tilikum produced a double slide projector show that was shown in sync with an audio cassette.  It’s clearly dated, but the primary message is still the same.

If you have information or corrections for the timeline, email Dan in Marketing.

1908 Russell Baker is born in the Chehalem Valley, the fifth child of Harry and Ida Baker

1938 Electricity comes to the Chehalem Valley

1950 – Russell and Irene become sole owners of the Baker farm

1971 Tilikum is established and an 11 member Board of Directors is formed for planning and development. Lon Fendal proposes the name Tilikum which means friend or friendly place in Chinook jargon.
1971 Gary Fawver begins as Tilikum’s first Executive Director (1971-1990)
1971 Susan Fawver begins as Food Service Director (1972-1988)

1974 First Tilikum sponsored retreat held.
1974 Tilikum begins the first Potlatch fundraising event at The Thunderbird Inn in Portland. The event was sponsored by one generous donor. Potlatch in ordinary Jargon usage this means “to give”, or anything given, a present. It became the standard word used to describe the great gift-feasts which underlay the Pacific Northwest Coast people’s economic and political systems. Potlatches were ceremonials of giving away or destroying one’s possessions to gain social status, often accompanied by lavish theatricals and conspicuous consumption (and destruction, to show more wealth could always be acquired). The goal was to earn prestige, as well as humiliate one’s rivals into poverty by forcing them to spend more on a feast to outshow your own. In Chinook Jargon, the word potlatch simply meant “give” or “a gift”, although a gift with no reciprocal obligation expected at all is a cultus potlatch – just an ordinary gift.

1975 Ownership of Tilikum is transferred to George Fox College

1977 The Quiet Place is built on the south side of Lake Tilikum.

1984 Dining room and kitchen are expanded and remodeled with the help of more than 50 volunteers.

2001 Quest Camp begins as a Day Camp for older kids

Back to the Northwest Yearly Meeting (2012 – Present)

2017 A Writers Retreat is held at Camp Tilikum with Renovare and Richard and Nathan Foster, and a groundbreaking is held for the new Writers Cabin.
2017 The Lakeside Village Capital Campaign begins 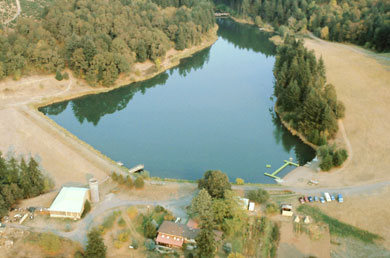 What Tilikum is all about.

The Gift of Tilikum – The Russel and Irene Baker Legacy  [View the video]
Used with permission of OPB.