Tilikum began as the result of one family’s faithfulness to God.

Taken in 1946, this family photo shows Russell and Irene with their four daughters, Lucille (two weeks old) and (left to right) Rachel, Elma, and Earlene.

Russell Baker was raised on a dairy farm in the Chehalem Valley. Eventually, Russell bought this farm, and the acquisition of it caused him to seek out his personal values and God’s purpose for his farming life.

On October 12, 1962, the Columbus Day storm blew through western Oregon with hurricane force winds. The Baker farm was hit especially hard. Russell thought he was financially finished. He wrote, “In meditating on what to do. I felt led to make a vow or covenant with the Lord…if He would bring me out of this mess, I would not only give a large part, but all.”

In the next few years, Russell did recover from the storm damage, and according to his promise, he began to look for ways to use his farm for God’s work. In 1968, Russell sold some of his property and purchased a tractor to use in developing the lake. In 1970, the Bakers donated the newly formed 15-acre lake, their new home, a barn, and the remaining 77 acres of the original Baker farm to the Northwest Yearly Meeting of Friends.

In 1975, Tilikum came under the ministry of George Fox University. In 2012, ownership of Tilikum transferred back to the Northwest Yearly Meeting of Friends. Just like the Baker family, as friends of Tilikum you can truly help the long-term success of our ministry with gifts through your estate plans. Often our cash resources are limited. What if you could make a lasting permanent gift that was bigger than you’ve ever dreamed possible?

Consider making Tilikum a part of your estate plan. 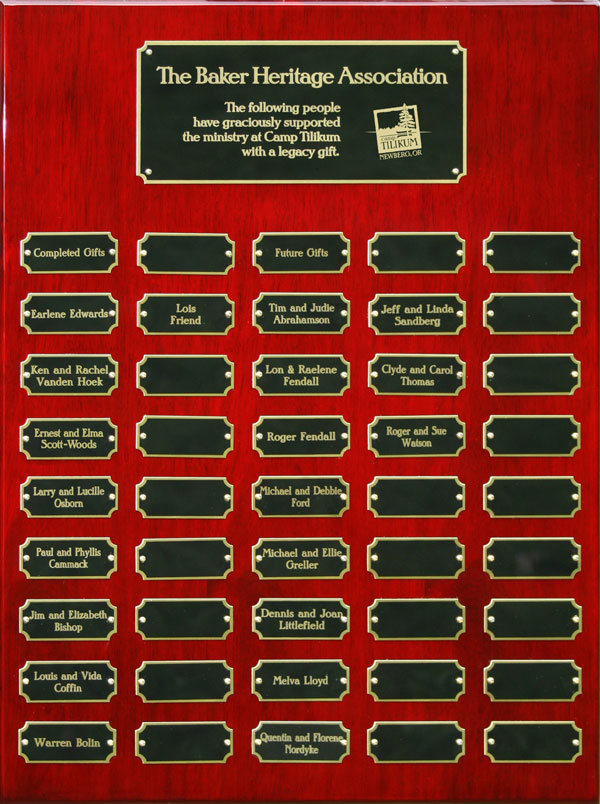 If estate planning is something you are thinking about for the first time, or if you need to update an older estate plan, we have resource material and advisors available to help you. To get you started, Tilikum has a “Will and Trust Planning Guide” and “Estate Inventory form” free for the asking. In addition, we have a representative who is well-versed in the technical aspects of business transition, retirement and estate planning. While Tilikum cannot serve as your legal counsel, our representative is trained to help in areas such as:

Thank you for considering membership in The Baker Association.

Consider making Tilikum a part of your estate plan.